I had a bridge replacing four front teeth. The bridge was anchored by the canine teeth. Now the canine teeth have come loose. I went back to the clinic where I had the dental bridge done and they suggested a partial denture to replace all those teeth (including the canines) and then another for a missing lower molar. I have found the partial to be incredibly uncomfortable. Now they’re suggesting using mini implants to replace the upper teeth. I decided to get a second opinion. This doctor had a vastly different treatment plan. He wants to do a bridge on the lower molar because he said one of the adjacent teeth needs a crown anyway. Then he wants to place three regular-sized dental implants one where each of my canine teeth were and a third directly between them. When that’s done he will attach another bridge to the implants. His plan is considerably more expensive. I’m totally confused as to which is right and am trying to not just let the price difference dictate my decision. Do you care to be the tie-breaker?

Right up front I am going to tell you that the second plan is by far superior, but I want you to understand why. Let’s start with the mini implants the first dentist is suggesting. These are not meant to support individual teeth, including dental crowns. They don’t have the necessary strength. Instead, they can sometimes be used to help stabilize a denture, but even then, they won’t be as strong as traditional dental implants.

At some point, likely sooner rather than later, these mini-implants will fail. Then what will you do? When dental implants fail, they take bone structure with them. In order to have new implants placed, that bone structure will have to be filled back in. Now you’re talking about needing bone grafting surgery even before you can have the surgery to replace the mini implants. All for a procedure that will likely fail again.

Your second dentist’s recommendation has solid engineering principles behind it. I want you to peek at this picture below. 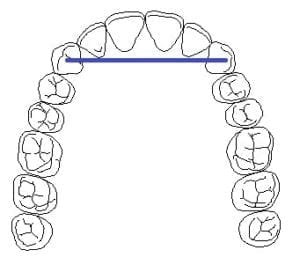 The way your previous bridge was designed, it put the abutment teeth (the anchors for the bridge) on your canines. There are a lot of twisting forces in this position involved when we bite or chew. It wouldn’t surprise me at all to learn that it didn’t take long for the abutment teeth to come loose, which is why you are now losing them.

Full-sized dental implants can support a single tooth, so replacing those canines with them is a fantastic solution. But, wouldn’t attaching another bridge to them have the same problem as your previous bridge? Yes, except, the second dentist is suggesting a third implant directly between them to help stabilize things. This will prevent that twisting motion, enabling the implants for your bridge to remain secure, possibly for the remainder of your lifetime.

Go with the second dentist. He has a much better understanding of dental implants, tooth structure, and biting forces.

I had four dental implants placed. I just received the crowns and two of them have already fallen out just a day later. Dental implants aren’t cheap and I know my dentist is expecting the second half of his payment soon. I don’t feel I should have to pay for them if they fell out this quickly. He said they’d last years. Is this fixable? Should he re-do them? 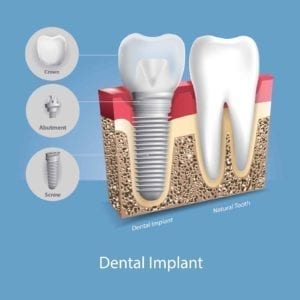 There is something seriously wrong here. You’ve lost half your dental implants in one day. I feel fairly confident the others will not be far behind. You need to contact your dentist and let him know what is going on right away.

To answer your first question. No, you should not have to pay for these. It’s a pretty basic standard to expect your dental implants to stay in. While these can be re-done, you need to be certain your dentist can tell you why they failed before moving forward.

You should know, that dental implants have 95% success rate, so what you’re experiencing is unusual. When dental implants do fail, here are some of the main reasons. Notice that most of them are a failure on the dentist’s part.

Once you find out why this happened, you can have it re-done (at your dentist’s expense). Unfortunately, you will need to have an additional procedure done first to get your jaw in a position where it can accept implants again. You’ll need to have some bone grafting done. Then, once you’ve healed from that, you can start over.

I recently lost my first tooth. I find it quite upsetting. I’ve been told that a dental implant is the best replacement for a tooth. However, I have type 1 diabetes. Will that keep me from being a candidate? 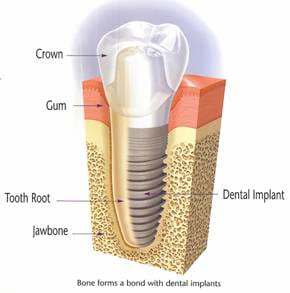 I’m sorry you lost a tooth. I certainly understand why it is upsetting. You made a good choice in wanting to get a dental implant. They are the closest to have a healthy natural tooth. While having type 1 diabetes does not necessarily keep you from being a candidate for getting a dental implant, it is a significant risk factor.

You will need special diagnostics to help pinpoint any additional possible risk factors. You’ll also want to be certain you go to a dentist who has done extensive training in the dental implant procedure. It is a complicated, advanced procedure and your situation makes it even more complicated.

Look at some of Dr. Marion’s qualifications to get an idea of the type of dentist you want to do your dental implant procedure.

A dental implant procedure is done in two different stages. The first is the surgical stage, where the implant is placed to mimic your tooth root. The second is the restorative stage. This is where your dentist will create a dental crown to replace the tooth itself.

If you have never had a dental restoration you should know that whatever color your dentist makes it will be permanent. A dentist with good cosmetic skills will match the crown perfectly to your tooth. You’ll want to be certain your teeth are the color you want.

If you want to upgrade the brightness of your teeth, do the teeth whitening before you have the crown made. This way you can have the crown the color you will want permanently.

Our office follows all of the infection-control guidelines of the Centers for Disease Control and Prevention for the dental setting, including updates for combatting the spread of the coronavirus. We are confident that you are safe with us.