I received an advertisement for Luster Premium Home Whitening. It’s a little cheaper than what my dentist’s office quoted when I called them so I am wondering if it actually works and if it is safe. 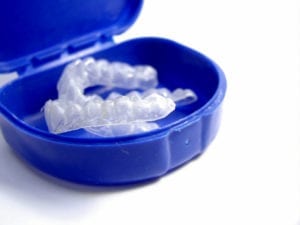 I periodically review these type of things at patients’ requests. While they all have downsides in comparison to professional teeth whitening, most of them have a valid whitening ingredient. In the case of Luster Premium, that is not true. There is not a valid whitening ingredient in this product. The only whitening that takes place with this is due to a pigment in their “super whitener” — zinc oxide. This sticks to the teeth and makes the teeth look temporarily whiter. It does not actually whiten them. The pigment wears off. I am convinced that the positive reviews they have are from people who saw the whitening difference from the pigment and wrote the review not realizing it would quickly wear off.

If cost is the only thing keeping you from getting teeth whitening done by your dentist, you could put some money aside every few weeks or possibly talk to your dentist to see if he or she is open to allowing you to have a payment plan with them. If they say no and you are anxious to do it right away, an over the counter product that works is Crest Whitestrips. It is much weaker than the type of whitening you would get with your dentist but it will work. Another issue is it will only cover the front six teeth. Most smiles are at least eight to ten teeth wide. If that is you, you can use extra strips.

Honestly though, by the time you purchase enough kits to get your teeth really white, you would have spent less money if you would have just saved up and had it done right with your dentist. Plus, you can keep the whitening trays and, in future years, when you need a touch up you will just need to purchase the gel which isn’t nearly as much money.