I had four Lumineers placed. I was pretty specific about how white I wanted my smile. Because of that, I even had my teeth whitened ahead of time. But, when my Lumineers were placed they looked darker than I anticipated. When I asked my dentist about it he told me he had a “natural” stain put on the Lumineers so they wouldn’t look fake. I don’t think they would have looked fake with the color I wanted, so I don’t understand why he did that. He told me to give it a few days and I’d probably like them. I tried but didn’t adjust in my view. I called him back so he had me come in. When I did, he sort of drilled off some of the top layer with the stain to get to the whiter color underneath. Now, they are uneven and the color seems dull. They look awful. Is there anything which can be done to fix them at this point? 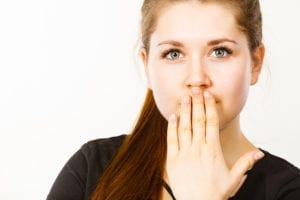 I’m sorry for what you’ve experienced with this, especially given this probably cost you a pretty penny. I do have some good news for you, but first let’s go over the reason why this happened. You told him you wanted a very white smile, yet he still put a stain on the Lumineers to make them look natural. This tells me your dentist has not invested in a great deal of training in cosmetic work. That doesn’t surprise me. Lumineers is often marketed to inexperienced cosmetic dentists as being easy to place.

In dental school, dentists are taught they know what is best for the patient. This means you wanted a white smile and he felt it needed to look natural. As the dentist, he thought he knew best. If he’d invested in cosmetic training, he’d know this is different. You are creating the smile the patient wants. Therefore, it is the patient who knows best in these situations.

Second, his drilling of the upper layer. This was the wrong thing to do as you’ve discovered. He should have just re-done the whole case, especially given he didn’t follow your instructions as to what type of smile you wanted. Instead, he takes a short cut which essentially ruins your Lumineers. The bad news is actually the good news as well. Because he damaged them so badly, you are able to get a refund and have this done by a more experienced cosmetic dentist.

If a dentist is serious about cosmetic dentistry they will have a smile gallery on their website. The one thing I would do is call and make sure the before and after images of the work they’re displaying is work they have done themselves and not stock photos. Look at their photos. Do you absolutely LOVE the results? If not, look for someone else. Don’t be surprised if whichever dentist you end up with chooses a different brand than Lumineers. There are several brands of porcelain veneers and Lumineers isn’t know for its quality in aesthetics.

This blog is brought to you by Duluth, GA Dentist Dr. David P. Marion.